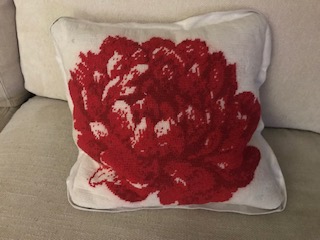 (.. So the photo shows a cushion in my home which is made from a tapestry I made myself. In keeping with the theme ‘ Do It Yourself’. Actually I got this tapestry the week Liberty died. It focused my mind on a task. I think of it as Liberty’s cushion.)

My early career was spent at major record labels. I (mostly) enjoyed that work and particularly working at Sony Music UK. These days, however, I spend almost all of my time working with independent music artists and the industry that surrounds them. We work on our own a lot and in pairs and small teams. We work initially without pay on artistic visions that other people cannot yet see, and therefore cannot ever give full and complete support or encouragement to. It’s hard but I’m very lucky to be part of this supportive community of artists, writers, producers and independent business people and I have felt the full benefit of that support on this project. Generosity, wisdom and utter commitment to art and music, are something that my gang have got nailed.

However, I really understand why sometimes artists and writers feel like ..  ‘I’d love someone to come give me a big cheque to just be creative with.’ But there are lots of problems with this way of working; First of all, that’s not what record labels ever do or did. They aren’t patrons, they are banks. Put simply – there ain’t no such thing as a free lunch. Often when you get a record or publishing deal, you don’t have full control of your art. That can be OK, but if you want to do things that other people are not doing, or may struggle to understand at first, then it often won’t be.

But there is something else even more important in my view about ‘doing it yourself’ – There is absolutely no satisfaction in the world like placing a bet on your own creative vision, and then living each small triumph as step by step that faith and determination pays off.

This summer I spent long (usually weekend), days endlessly scouting animators to find thr right person to make the video for I Can Love You From Here. This is not an easy creative task. I’m basically asking someone to give up a month of their life for little pay to create a piece of art that tells the story of life and death. Each time I’d find a great animator, they would get poached to work full time on a film project. I quickly learned that this is the way animators seem to work, they have pockets of downtime in-between their full time gigs. Did you know that it takes an animator working full time for a month to make a 4 minute video?! I didn’t…

In total, I have been in touch with, brainstormed, shared ideas and spoken endlessly about the songs with maybe 30 – 40 animators in total . There were days when I thought I’d never get even one video for the song ‘I Can Love You From Here’. How was I to promote the song without a video? A filmed or live video just wouldn’t work. But I had to keep the faith and keep going because I’d got this far ..

Today I have four finished animated videos saved on my drive. Each one is utterly beautiful and unique and perfectly tells the (non-literal) story of the song it is created for. I can hardly believe the commitment and talent of the four women who made the videos, but they have really made the Liberty’s Mother project.

You don’t get experiences like this by asking your record label to hire someone good and pointing a cheque book in their face…  And you usually don’t get the best art that way either.